In some living rooms today, gather Christians who belong to what is called the "house church" movement. They cite biblical proof texts speaking of the church in the house or small communities. The cherry picking of bible verses, while ignoring inconvenient ones, is the lot of the radically anti-church Christians. So determined to have their version of "church" hold sway, the ignore all calls to Christian unity, and champion the "church" of four or five in the house nodding happily to their version of what "church" means. Seeking the early church, they gather in a manner they believe replicates early Christian worship. But does it?

It has long been established that early Christian worship was liturgical. It was patterned after the Jewish temple worship which was familiar to all the disciples, faithful Jews every one. Most house churches today follow a free flowing, spontaneous worship. Christian worship from the earliest day was Eucharistic. Holy Communion is not practiced in most house churches, and to the extent that it is, there is a denial of the real presence of the body and blood of Jesus. But even their construct that house churches were tiny disjointed gatherings is fundamentally wrong.

Evidence today indicates that though church may have met in a house, it was not a living room setting. It was not informal. It was not spontaneous. One of the most ancient known Christian house churches was discovered in the ruins of Dura-Europos. Serving the town from perhaps as early as 233 A.D., the house church of Dura-Europos was no small setting. The house was large and grand. It was converted to church use. It had an assembly room; it had a courtyard; it had a baptistery. And to the shock of many, it had icons - religious painting on the walls depicting Jesus, the healing of the paralytic and Jesus and Peter walking on water. And it was not disconnected. Worship was led by a bishop who was in communion with the other bishops of the Church. 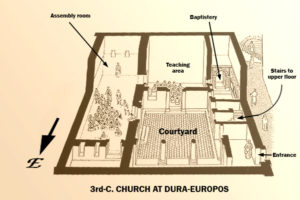 Sola scriptura and personal revelation has rent the Christianity into 50,000 or more denominations, each based on some human interpretation of scripture. Each denomination is certain it is right and that others are wrong. Yet, because they have made the Church of God a church for themselves, there is no arbiter beyond the individual. The house church movement is simply another erroneous effort by protestants to connect with the historic Church which they long ago departed from. Yet even this effort is a mockery of true inquiry, as it continues to reflect the personalized faith of protestantism, rather than the worship and faith delivered to the nascent Church of Christ almost two millennia ago.  The faith once delivered to the saints has been preserved in the Orthodox Church, faithfully through trials and heresies.  If you want to connect with ancient Christianity, it won't happen on your couch.  Go to the Church where it is still practiced.

For more detail on the Dura Europos House Church, see this article.

Although it lacks audio, you can take a quick look at my presentation "How Did the Early Church Worship" on Slideshare:

Exploring the Early Church - Lesson 1 from FrMakarios
And lest you worry that you are getting a biased Orthodox view of how the Early Church worshiped, here is a Protestant source confirming the same basic outline.
It's only fair to share...