I’ve seen this meme posted a lot this Christmas: 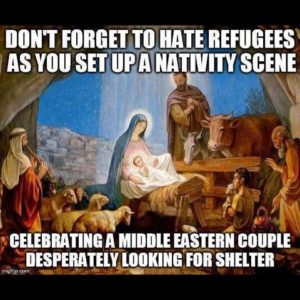 and I’ve seen a lot of people get really upset about it.  In my homily for the Sunday after Nativity, I talk about the Gospel reading appointed for the day, recounting Joseph’s flight into Egypt, and how we quite often let our politics inform our religion, rather than vice-versa.  Why does the idea of “refugee Jesus” inflame us?  Should it?  How do our views of those on the margins of society square with Christ’s earthly ministry?  Have a listen and leave me a comment!

Today’s Gospel reading is reprinted below if you need a reminder.

Listen to “”Christ the Refugee” – Homily for the Sunday after Nativity” on Spreaker.