Today’s Homily on the gospel account of the Last Judgment (Matthew 25:31-46). It's only fair to share…FacebookTwitterPinterestemail 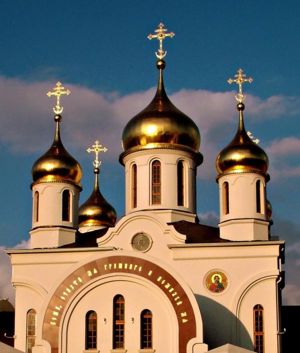 In celebration of the feast of St. Nicholas, we offer this homily discussing the life of the Sainted Hierarch and how he stands as a shining example to Christians today! Listen to “St. Nicholas – Charity, Zeal and Love” on Spreaker. It's only fair to share…FacebookTwitterPinterestemail

The Epistle Reading for today gave me much to reflect on as I prepared my homily.  And after I was done, I thought it was not my best effort to be sure.  But the theme of the reading was so strong, it merits more comment.  The Epistle (1 Cor. 1:10-18) begins: Now I beseech you, Read more about Be Perfectly Joined Together[…]

My homily for the 28th Sunday after Pentecost if provided after the "Read More" line.  Unfortunately, the recorder ran out of memory as I was giving the homily, so this is a rough draft of my notes.  The following readings were given on Sunday.

12 Giving thanks unto the Father, which hath made us meet to be partakers of the inheritance of the saints in light: 13 Who hath delivered us from the power of darkness, and hath translated us into the kingdom of his dear Son: 14 In whom we have redemption through his blood, even the forgiveness of sins: 15 Who is the image of the invisible God, the firstborn of every creature: 16 For by him were all things created, that are in heaven, and that are in earth, visible and invisible, whether they be thrones, or dominions, or principalities, or powers: all things were created by him, and for him: 17 And he is before all things, and by him all things consist. 18 And he is the head of the body, the church: who is the beginning, the firstborn from the dead; that in all things he might have the preeminence.

12 And as he entered into a certain village, there met him ten men that were lepers, which stood afar off: 13 And they lifted up their voices, and said, Jesus, Master, have mercy on us. 14 And when he saw them, he said unto them, Go shew yourselves unto the priests. And it came to pass, that, as they went, they were cleansed. 15 And one of them, when he saw that he was healed, turned back, and with a loud voice glorified God, 16 And fell down on his face at his feet, giving him thanks: and he was a Samaritan. 17 And Jesus answering said, Were there not ten cleansed? but where are the nine? 18 There are not found that returned to give glory to God, save this stranger. 19 And he said unto him, Arise, go thy way: thy faith hath made thee whole.

END_OF_DOCUMENT_TOKEN_TO_BE_REPLACED

14 And Jesus went forth, and saw a great multitude, and was moved with compassion toward them, and he healed their sick. 15 And when it was evening, his disciples came to him, saying, This is a desert place, and the time is now past; send the multitude away, that they may go into the villages, and buy themselves victuals. 16 But Jesus said unto them, They need not depart; give ye them to eat. 17 And they say unto him, We have here but five loaves, and two fishes. 18 He said, Bring them hither to me. 19 And he commanded the multitude to sit down on the grass, and took the five loaves, and the two fishes, and looking up to heaven, he blessed, and brake, and gave the loaves to his disciples, and the disciples to the multitude. 20 And they did all eat, and were filled: and they took up of the fragments that remained twelve baskets full. 21 And they that had eaten were about five thousand men, beside women and children. 22 And straightway Jesus constrained his disciples to get into a ship, and to go before him unto the other side, while he sent the multitudes away.

The Gospel reading of the Five Loaves and Two Fish, also known as the Feeding of the 5000, is one of the most popular Gospel stories and frequently preached on.  The problem is, when you engage in self-interpretation, you can imagine so many lessons that might be intended here.  But was that the intent of the author of the Gospel?  In this homily, we will look at the historic understanding of this miracle, and why self-interpretation can lead us away from truth and the important questions raised by this account.

To see the rough draft of this homily, click "Read More" END_OF_DOCUMENT_TOKEN_TO_BE_REPLACED

On the Sunday of All Saints of North America, Fr. Irineos examines the question of "What is a Saint?" by looking at the readings from Vespers and the Epistle for this Sunday.

A rough transcript is provided below:

END_OF_DOCUMENT_TOKEN_TO_BE_REPLACED

On Pentecost Sunday, Fr. Irineos reflects on the descent of the Holy Spirit upon the Apostles, and the founding of the Church. He also discusses how, though the Spirit may lead us into all Truth, this is only possible through the guidance of the Light of Christ.

END_OF_DOCUMENT_TOKEN_TO_BE_REPLACED

On the Sunday of the Blind Man, where we also commemorate the Holy Evangelist John (May 8 OS), Fr. Irineos discusses how we can put the lessons from today's readings (and John's Gospel) to work in our daily lives.

Listen to "Actualizing Grace - Lessons from the Sunday of the Bilnd Man" on Spreaker.