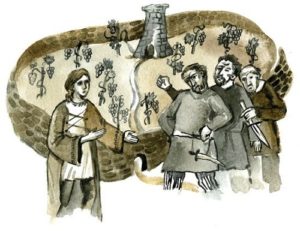 Today we have appointed for the Gospel reading another parable.  But unlike many of the parables, which contain a readily discernable moral to them, the parable today is less a moral tale and more a prophecy.  Indeed, when we read that the householder sends his son, who is rejected and killed, we know right away that Jesus, in telling this parable, prophesies of his own coming voluntary death on the cross.

In understanding the parable, it is always the obligation of the Orthodox Christian to seek the understanding of the passage as it has been universally understood within the Church.  We must avoid the temptation of private interpretation, which inevitably leads us to interpret passages in a way pleasing to us, either for purposes of argument or comfort.  But what would please us is not helpful to us.  We must understand the passage as the Church understands it.

“Hear another parable: There was a certain landowner who planted a vineyard and set a hedge around it, dug a winepress in it and built a tower. And he leased it to vinedressers and went into a far country[1]”

This is creation, and the vineyard represents the descendants of Abraham – the Jews, chosen by God to care for his creation.  The hedge is the law, given to them as a boundary for their protection.  Blessed Theophylact tells us the winepress is the altar and the tower the temple.  And all this he leases to the vinedressers who are understood to be the teachers and leaders of the Jews.  And having put in place all that was needed for their preservation, the householder goes into a far country – St. John Chrysostom says that this means that God “bore long with them, not always bringing the punishments close upon their sins; for by His going into a far country, He means His great long-suffering.”[2]

God has always honored the free will of his creation.  From the fall in the Garden to his voluntary death upon the Cross, when we call God long-suffering, we mean he has suffered our offenses and rejections without utterly destroying us for them.  He does this out of patient love and pure charity, hoping only that we return to his bosom.  And the householder, like our loving God, when the season came for the fruit to be gathered and the rents collected, he sent servants to collect them. The Church teaches that these servants were the prophets who tried to warn the Jews and their errant teachers of their misdeeds and demand they be accountable to God.

And so the householder sends another, his own son, saying they will respect my son.  But the wicked servants recognize him, and say, this is the heir, let us kill him and seize his inheritance.  We don’t need a degree in theology to understand who the son in this parable is, nor to know that as Jesus told this parable, he foretold his own rejection and crucifixion.  Indeed, the Pharisees who heard the parable are said to have though he was speaking of them.  And he was.

Jesus ends with this saying which seems odd, even out of place for a parable about a vineyard:

“The stone which the builders rejected, the same is become the head of the corner: this is the Lord’s doing, and it is marvellous in our eyes?”

We well know that Christ is the head of the Church.  He is the foundation of all that we believe.  We know that Peter’s confession “though art the Christ, the son of the living God” is the rock upon which the Church is built.  And as the cornerstone joins the walls together into one solid structure, Christ has bound us all into one seamless faith – as Blessed Theophylact reminds us.[4]

But yet, why do we read this parable?  It speaks of things past.  It has less of moral to it, like we see in the parable of the prodigal son, than it does a simple prophecy of the things we know have come to pass combined with an allegorical reminder of the Old Testament Jews rejection of the law given to them and the prophets sent to them.

Well again, we find the importance of this reading, not in its conclusion, but in what’s not there – in fact what comes next in the Gospel.  Christ says to those who hear – the Chief priests and the Pharisees:

“Therefore I say to you, the kingdom of God will be taken from you and given to a nation bearing the fruits of it. 44 And whoever falls on this stone will be broken; but on whomever it falls, it will grinds him to powder.”[5]

Who is that nation?  If the Jews have been stripped of their favored position and the kingdom handed over to another nation, who is that?  In a word, it is the Church.  The Church is the new Israel, a concept which permeates the writings of the Apostle Paul and which has been held in the Church from antiquity. We are the inheritors of the promise.

But what does this mean to us? Are we told the parable to make certain that God doesn’t again take the kingdom from the “new Israel?”  Not at all. It’s not a repeat that we need to be concerned about.  We remember Christ’s promise to Peter upon his confession – the gates of hell shall not prevail against the Church. But we must be certain that we are bearing the fruits of the vineyard.

What we must do then is take heed of the warning of what happens to those who stumble upon the stone!  We must make sure we remain within that Church.  We can’t fall prey to the false teachers – the Joel Osteen’s, the TV evangelists who preach their own theology devoid of any connection to the apostolic faith.  The descendants of Abraham lost the Promise because they were mislead by their errant teachers and failed to heed the many warnings of the prophets!  We must not compromise the faith for popularity, for acceptance, for power, for worldly glory.

“whoever falls on this stone will be broken”

And we must be on guard within our own Orthodox faith.  We must be careful of those who would say we must change with the world.  We must watch for those who seek change on the basis that we must be relevant to the culture.  Those are the same people who would have told the martyrs of the early church just to go along with the emperor – make the sacrifice to the idols.

“on whomever it falls, it will grind him to powder.”[6]

We must guard against the dangers of ecumenism – the compromise of the faith for a false unity.  There is no unity outside the apostolic faith. There is only stumbling over the stone – or worse – the stone falling on us. We must guard against syncretism, the idea that all religions hold the truth in different expressions.  Scripture tells us the faith was once delivered to the apostles – not spread across the world to the Buddha, the Shinto, to Mohammed or to Confucius.  Once we let go of that scriptural truth – surely the stone will have fallen upon us.

Brothers and sisters, we are so fortunate to worship within the walls of the building supported by the cornerstone, Christ.  It is not for us to try to tear those walls down to save the feelings of those who stand outside.  It is not for us to say, there are other walls built as well.  Instead we must stay safe within these walls.  We must bring those we love inside with us, that they may find the same shelter and protection we enjoy.  And we must invite those who stand outside to enter through the narrow gate.

So as we return to this divine liturgy, let us not stumble – let us not be crushed to powder and scattered.  But let us instead build up the foundation where the cornerstone has been laid, that we might truly merit the vineyard that has been passed to us to bear the fruits within to the world outside the walls.