The article linked below is from a Roman Catholic publication, but it was proudly shared by the Chicago archdiocese of the GOA without correction. Speaking the day before Pope Francis, Bartholomew “offered a blueprint for the future of inter-religious dialogue based upon recognizing the central role religion plays in human life.” In it the ecumenical patriarch condemns what he calls “fundamentalism.” The problem comes when he actually defines it: “fundamentalism considers that its own truth is unique, and must therefore be imposed over the others, thus making impossible for 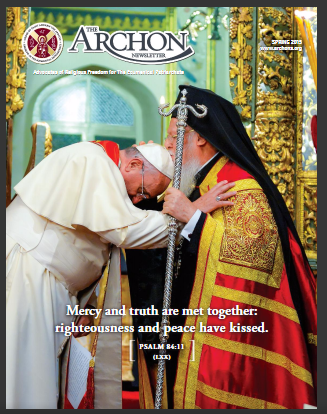 This internal attack against those who hold Orthodoxy to be true and unique is only the latest volley from Constantinople.  At the purported pan-orthodox council in Crete, documents were adopted referring to heterodox confessions as churches.  (I commend the excellent writing of Fr. Peter Heers on the myriad problems within the “council.”)  Priests and bishops who spoke against them were threatened with excommunication, in a papal type overreach by Constantinople.

Fordham professor and GOA leading light Prof. George Demacopoulos published an article entitled Orthodox Fundamentalism, that defined fundamentalism based on a false premise he assumed is shared by those he calls fundamentalists, and goes on to attack fundamentalists as “anti-intellectual.”   Name-calling and shaming is the mode of operation for this intra-necine move against traditionalists.  It should be noted that Fordham then hosted an ecumenical conference with the Roman Catholics on the “problem” of fundamentalism – not in protestantism, which is the only plce where the term has any meaning – but within their own membership!

If the ecumenical patriarch considers it a threat to believe that Orthodoxy holds the unique truth, how can he even claim to be orthodox? This is what comes of ecumenism. Truth must be subservient to “dialogue” and “bridge building.” Contending for the faith becomes fundamentalism.