Evangelicals are quite adept at using social media to push their incomplete theology across multiple media.  Whether with videos of “preachers”, songs by praise bands, or the ubiquitous meme, multiple pieces of evangelical social media cross the screens of their friends or others daily.  And some of it is fine.  Some of it is not distorted theology.  Some of it is not novel interpretation.  Some of it might even be a bit edifying.  But likewise, some of what is posted lays bare the vacuous theology of a sect that has rejected historical Christianity and replaced it with modernist, self-soothing refrains.  This article will take a look at some of these memes and discuss the problems inherent in them. 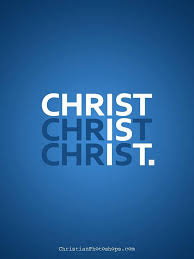 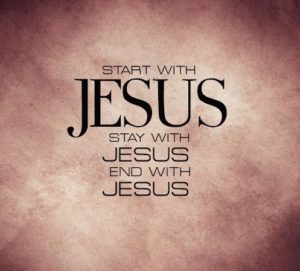 This seems nice and peaceful enough.  Who can argue with the sentiment?  But it is a prime example of the incomplete theology of the evangelicals.  In the early Church, there was great effort put into rejecting the heretical attempts to impugn the Trinity.  Various heretics denied the divinity of Christ.  Others put the Holy Spirit in a lesser place than the Father and the Son.  But modern evangelicalism has gone to the other extreme. They have elevated the second person of the Trinity, Christ, to a paramount position, such that the Father and the Holy Spirit are superfluous and unnecessary.   Some even go so far as to say it.

In these messages, intended to be uplifting demonstrations of faith, what we find instead is a new Unitarianism, but one which centers only on the divine Christ.  This is fundamental error and a dangerous way of thinking.  It aggregates in the person of Christ, all of the work of the Father and the Spirit.  Without regard to intent, this is messaging that simply misses the mark and by omission profanes the Godhead. 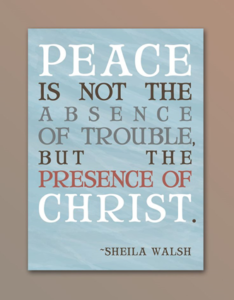 Sheila Walsh is a “born again” Christian musician and evangelist, known for her role on Pat Robertson’s 700 Club.  Somebody created this meme, I am sure with the intent of providing comfort and uplifting emotional feelings for her fellow evangelists.  The message here is that when you feel peace it is because Christ is present.  There are a lot of bad implications in this meme.  For instance, is the converse true, that trouble is the absence of Christ?  What hogwash.   Remember Christ’s warning, “In the world you will have tribulation; but be of good cheer, I have overcome the world.” (John 16:33).  Christ is with us in time of trouble and peace.  One who enters into difficult times has not left Christ, nor has Christ left them.  What a horrid thought, and how weak a God it reflects.  Likewise, the idea that experience peace or comfort means that you have entered into the presence of Christ is deceptive and dangerous.  The Pharisees lived in comfort, but they were blind to the presence of God among them.  The afflicted, on the other hand, were always with Christ.  St. Theophan the recluse warns that when the evil one ceases his attacks against you and you feel a sense of peace, he has done so to lull you into a false sense that you have achieved a spiritual victory.  In reality, your shortcomings are such that he need not continue to try and knock you off the path to God.  You have fallen and he wants you to feel comfortable so that you make no further effort to press forward.  Sheila Walsh sends the opposite message, that peace equals spiritual victory.  This is not necessarily true, and among those of us who live in the world, it is more often than not terrible advice. 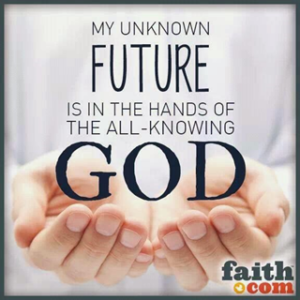 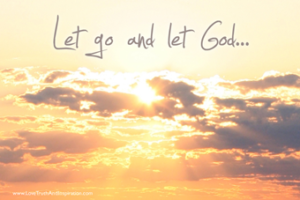 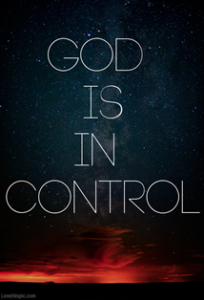 These memes are all a version of the God is in control vein of thinking.  It is intended to convey trust in God.
And trust in the Lord is a wonderful and biblical sentiment.  “But blessed is the one who trusts in the Lord, whose confidence is in him.” (Jeremiah 17:7).  But these memes all convey an erroneous sense of predestination, a denial of our God given free will, and an incomplete understanding of what trusting in the Lord truly means.

For example, the Psalmist extols trust in the Lord, but only in conjunction with personal effort. “Trust in the Lord and do good.”  (Psalm 37:3 - Masoretic).  Indeed, there are very few examples of any scriptural admonitions that begin and end with faith alone.  When Jesus heals, he often also admonishes, “go and sin no more.”  The work of the apostles, even to their death, was often accomplished with prayer, with anointing with oil, with the laying on of hands.  The work of God in our salvation is innately synergistic.  Even those evangelicals who claim salvation for anyone who “accepts Christ” require the participation of the one to be saved. (I’ll be publishing a new writing fairly soon on the false monergism of the evangelicals).  Trusting in God is wonderful advice, but like so much of the evangelical tenets, it is woefully incomplete.  It is scripturally incomplete.  And it threatens to lead those who follow it lost and astray, attributing to God all of the consequences of their own subsequent inaction.

Me and My Bible Memes

Here we have the myriad memes which exist to justify the wholly unbiblical doctrine of sola scriptura.  The interpretive approach, unknown for 1500 years after Christ’s death is explained away as a deviation that arose in the middle ages (400 AD – 1500 AD).  It’s a fascinating idea.  The canon of the bible was not set until around 367 AD.  Prior to that, various bishops accepted some books and rejected others.  For decades, the Apostles taught solely by word of mouth.  Church tradition didn’t “gain” equal ground with Scripture.  It pre-existed and then co-existed harmoniously with scripture from the day of Pentecost.  It is explicitly endorsed by Scripture, as the Apostle Paul wrote “Therefore, brethren, stand fast; and hold the traditions which you have learned, whether by word, or by our epistle.” (2 Thessalonians 2:15).  Nowhere in the scripture, is scripture alone mandated.  Thus, the Church cannot be “called back” to something that never was.  It’s pure deceit. 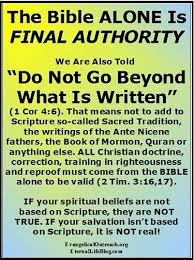 The authority urged by these memes has no scriptural basis whatsoever.  In fact the biblical citations in the meme to the right above are laughably unrelated to the issue of scripture and tradition. However, the authority of the Church is well founded in scripture.  The Church, for instance, is called the pillar and ground of the Truth. (1 Timothy 3:15).  Matthew commands that those who sinners be accountable to the Church and that those who “will not hear the Church, let him be to thee as the heathen and publican.” (Matthew 18:17).  These simplistic, seemingly inarguable memes sow confusion among earnest seekers and harden the hearts of those who have already been deceived.  In fact, it is telling that there are just as many memes opposing sola scriptura as supporting it.

Social media memes and banners are a new frontier in evangelism and one which right believing Orthodox should not omit.  We must be careful, when seeing what appear to be warm Christian sentiments, not to automatically click like or share, as the content may not conform to our Orthodox faith.  Discernment is necessary and the source of the post should be carefully scrutinized.  What memes have you seen that bother you?  I'll be adding to the article from time to time.  Your thoughts are welcome!